Back Door or Front Door? 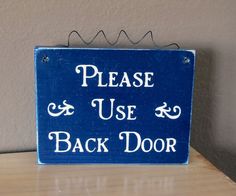 In Jennifer Torres’ article, “Breast milk and labour support: lactation consultants’ and doulas’ strategies for navigating the medical context of maternity care”, the author makes a declarative statement.  She says that both professions have filled a niche in maternity care practice that is not covered by nurses or physicians.  However, lactation consultants have been able to influence medical practice directly.  They entered through the “ front door” and have been welcomed by medical professionals, because breastfeeding is seen as a medical event.  However, doulas are not recognized as having anything meaningful to offer to medical professionals, and as such are seen as entering through the “back door”.

When the doula movement began in the late 1980’s, we were really trying to figure out how to get in through the front door.  Doulas have often read the same journals as medical professionals, and many of the doulas I know have college or advanced degrees.  We really thought that once physicians saw what we had to offer their patients we would be welcomed on the maternity care team.  However that was not what happened, and we have been relegated to the back door ever since.

One of my missions has been to do doula research that will convey the complexity of birth doula skills.  If we have enough evidence, eventually it will be too much to ignore.  But I’m also struck by the way we delegitimize ourselves.   We have had no choice but to declare our power as outsiders – we have had few opportunities to be insiders!  Having our knowledge and contributions to labor progress be ignored is seen as normal; we are used to this position.

So when I look at national certification efforts, I realize that there will be no recognition from other sources unless we do it ourselves first.  When the NAACP Image awards were televised last week, actor Laurence Fishburne made a statement along the lines of ‘we have to recognize ourselves first before expecting anyone else to see our worth.’

However I believe most strongly that the process in which national certification for birth doula efforts is absolutely vital to its success. In order to maximize its impact, it needs to:

This is a large undertaking.  It is not a kitchen table project.  We are talking about transforming the birth doula industry from one that is totally unregulated and provides no consumer protections.  National certification may be optional, but market forces will determine if it becomes the future standard for the profession.

Many of you have written to me asking when we will get started or even when it will be completed.  My commitment was to write about national certification in a way that would expose the issues involved, and to get doulas and other people talking.  I have completed that commitment, and it was my gift to my community.  I want us to make conscious decisions about our direction and our future and that only comes from considering various points of view over time.

I do not have any plans to create a national certification organization.  There are other projects in front of me.  I would appreciate consulting with any serious efforts to organize, because I feel I could offer a rich perspective.  I still have reservations that make me doubt what is possible, or if it should be done.  If NC is part of an effort to transform maternity care, reduce disparities in birth outcomes, or increase job opportunities in urban areas, there is possible foundation money available to fund our efforts.  It will be interesting to see what happens next.

Posts In This Series:

1.  Social movements – The Next Step In The Doula Revolution

3.  Do We Want A Place At The Table?  National Certification and Public Health

6.  This Post:  Back Door or Front Door?  What the Process of NC Would Need to Include