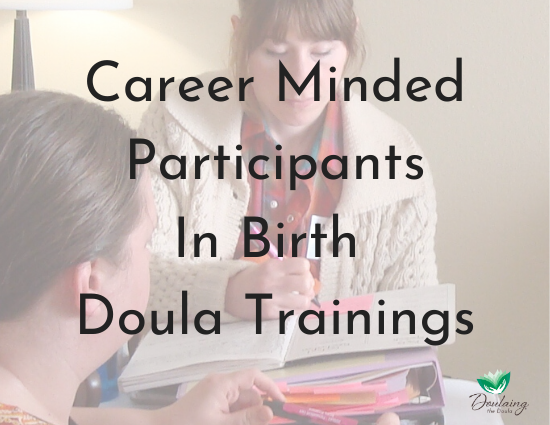 Its natural to assume everyone in your birth doula training was there to become a doula. Not so! Only about half the people are there because they want to do labor support as birth doulas. What else can my research can tell us about career minded attendees? In my Journal of Perinatal Education article, “What Motivates People To Take Doula Trainings?” (Summer 2016, Vol 25, No. 3, p. 174-183), “become a professional birth doula with my own practice” ranked as the fourth most popular answer out of eighteen possibilities. In the question where people were forced to choose only their favorite five reasons, 60% included “birth doula” but only 30% chose it as their number one reason.

Hospital Based Doulas: What about “working for a hospital program”? Only 4% chose it as their top reason, but 20% selected it as one of their top five. Some participants expected to work both independently and for a hospital, as 24% chose both options. Hmmm…there are only a handful of hospital programs that employ doulas or pay them as independent contractors in North America. So this percentage made me wonder if some trainings in my sample were being conducted specifically for a hospital based program. However, these responses were not associated with a specific training, location or doula trainer.

Midwifery and Nursing Students: Another significant presence in trainings was participants desiring to become midwives. “Want to become a midwife (or am considering it)” was the number one reason for 20%, and a top five reason for 43% of participants. For the most part, the midwifery and doula bound groups had little overlap. Only about a third of people who put “birth doula” in the top five also chose “midwife”. Midwifery bound attendees are different in other ways too. They tended to be younger, not have children, and only about half had attended a birth (not their own). Interest in midwifery was confined mostly to women in their twenties. It dropped off almost entirely in the 30-39 year olds, with resurgence in the 40-49 year old group (who had all had children and attended a birth). Another contributing factor may be that 64% of all nursing students (n=42) chose “midwifery” as one of their top five reasons, and nursing students in the study tended to be younger and childless. In my experience, midwifery students have always attended doula trainings. But only in the last eight years are many midwifery schools requiring that students take a doula training before being accepted. In this way, the training serves as a screening and preparation tool to ascertain whether people understand the importance of support skills.

Nursing Students made up 9% (n=42) of total attendees and were more likely to attend to increase their birth knowledge (72%) and to explore midwifery (71%), as indicated in their top five choices. I found it very interesting that one quarter wanted to be in an atmosphere that “believed in women’s bodies and ability to birth naturally”. For the most part they were not interested in a doula career (only 7%) but many intended to volunteer their labor support services (36% of nursing students).

In comparison, “birth doula” bound attendees usually have birthed or adopted children, tend to be more evenly distributed across the age spectrum, with about the same number in their twenties and thirties. Participants in this study adopted children at twice the average rate in the United States (12% versus 6%). I don’t know what that signifies, but it’s worth mentioning! Slightly more than half have attended at least one birth (not their own) already.

Volunteering As A Doula: Birth doulas also displayed other altruistic motivations. Ten percent chose “volunteering as a doula on my own or as part of a program” as their number one (2.5%) or number two (7.5%) reason. A closer look revealed that 23% of all people in the study chose these three reasons as part of their top five: “professional birth doula with my own practice”, “volunteer as a doula”, and “make money in a profession I enjoy”. They felt that all of these things were possible as part of their doula career. In an open-ended question, participants said they intend to volunteer for specific programs for low income women, to go to foreign countries to serve, or for their own parish or mission work. Its also possible that they felt that volunteering was part of the path to gaining experience, had a lack of knowledge of how this could affect doula businesses, or thought this was an easy way to get started. Recall, these are neophytes to the doula world – these questions were asked before they had ever taken their training or likely joined a doula group on Facebook. They probably were unaware of the divisions over the “no free births” paradigm.

Making Money: What about “making money in a profession I enjoy”? Data was collected in late 2010 and again in 2013. While the two samples did not have any statistically significant differences with one another, the birth doula world itself was going through a large shift. In the early days of doula work, the idea of “making money” almost seemed exploitative, like it was breaking some kind of code of honor. How could you benefit from someone else’s labor and birth experience? It wasn’t unusual to think of doulaing as “a hobby that pays for itself”.

The next step in our professional evolution was a push to make birth doula work viable economically. It required a shift in how doula services were perceived by parents, perinatal professionals, as well as doulas themselves. I consider this period of time, from 2010 to 2015 to be a time of commodification[i] [ii] in the birth doula profession, most notably from the influence of ProDoula and their beliefs and paradigm. This shift in business professionalism has made “making money in a profession I enjoy” much more likely today. My point is that this was an emerging idea at the time of the first sample, and was much more established three years later at the time of the second sample. However there was no difference in the two time periods. Why?

First, these are not members of doula communities, but outsiders. It was fairly rare at the time to join a large doula group on Facebook before taking a training. Today, (by my own observation as a doula trainer) that is often the first place an interested person will visit. Two, commodification and the presence of doulas in the labor room are now assumed to be normal by non-doulas. Three, only DONA International trainings were sampled (2 countries; 19 states, 3 provinces; 38 trainers; 46 trainings; 467 participants; 85% response rate).  So these research findings likely only apply to trainings that also have an open focus (see “Take A Doula Training, Change The World” for more information on generalizability).

Now that I am a Research Fellow at the Center for Child and Family Well Being at the University of Wisconsin Madison, I am looking forward to interviewing a younger cohort and comparing the First Wave and Second Wave of birth doulas in future studies.

Perinatal Professionals: How about the childbirth educators? Only 14 out of 467 people identified as childbirth educators (CBE), but 63 people said they were taking the training “to enrich their childbirth education practice” as one of their top five reasons. Two things come to mind. First, people may consider the doula workshop to be part of the preparation to become an educator. Second, rather than focusing on becoming a CBE who teaches classes, their intention was to informally educate people about birth.

Nurses: Labor and delivery nurses made up 2% (n=10) of the sample, but nurses with no perinatal experience made up 4% (n=19) of the sample. Almost all of this latter group felt the workshop would make them more desirable candidates for labor and delivery positions, as indicated by choosing “add to my resume”. Seven chose “want to become a midwife” as their number one answer. A smaller number wanted to become birth doulas. Why weren’t there more nurses? As a doula trainer for twenty years, I can say that in the first seven years we had many OB nurses in trainings. But now nurses have other options to learn labor support skills at nursing conferences or workshops and earn CE credits. I also teach these workshops.

Non-birth professionals: Almost one fifth of participants (19%) taking trainings had no intention of becoming doulas, midwives, or labor and delivery nurses, as indicated by their top five reasons. Five percent chose “help women have better births not as a doula or birth professional” as their number one reason. Many had incidental contact with pregnant people and wanted to enrich their knowledge and support skills. They also wanted to be more informed listeners. In the open ended question, several listed their related occupation as social workers, home visitors, case managers, day care providers, or yoga instructors. This is a really important group. As I mentioned in my previous blog post [LINK], these are the outer rings of people who can pass along birth knowledge and listen attentively to birth stories. They extend our sphere of influence outward and change the conversations about childbirth to more meaningful ones, simply because they understand that support matters.

So far we’ve covered people who are in a training to advance their career aspirations, and those who want to increase their knowledge about birth and be inspired for change. In my next post I will cover a third group, who have a small but powerful influence over how a workshop actually unfolds. These are the people who are coming for healing from past births.

[i] Commodification is the transformation of goods, services, ideas, people, or other entities that were not previously considered goods for sale into a marketable and saleable item. It implies some standardization.

[ii] An interesting article on the commodification of women’s household labor, which has bearing on the internal and external struggles for legitimacy of the First Wave of Doulas (late 1980’s to mid 2000’s): http://digitalcommons.law.yale.edu/cgi/viewcontent.cgi?article=1126&context=yjlf