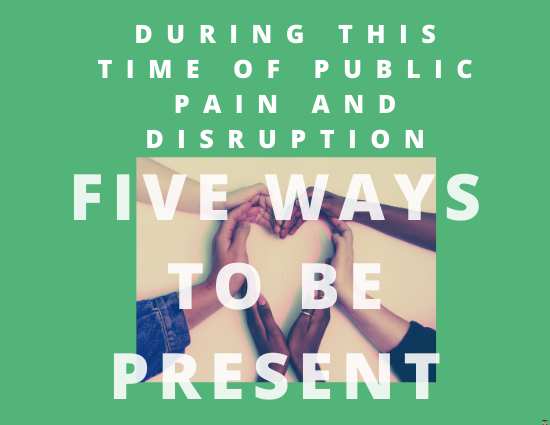 One of the things I’ve learned about Whiteness and white culture is our emphasis on doing things.  Activity and accomplishment are highly valued in white culture. People may judge themselves harshly on days when they “didn’t get much done”.  Perinatal professions emphasize this white culture of “doing”: we monitor, observe, intervene, deliver, and chart. There isn’t much value placed on reflection, taking time, and slowing down. This week you are receiving many lists of things to DO - to read, to educate yourself, to donate, to protest, and on and on.  I’m not going to urge you to do anything - except not to turn away.

Instead I’m going to invite you to stop doing and just be present.

Be present to the stories you hear about Black people’s lives.  You don't need to judge them, analyze them, or declare which parts seem truthful to you.  You don’t need to do anything but receive them.  Be present with what that story means to that person.  Listen to what meaning they are giving that story in their lives.  Seek to understand how they see themselves, the world and how it operates.  Be present without seeking to change their reality. Interrupt your own thoughts and go back to being present with the person sharing their story.  Just receive it.

Be present to the pain that is being expressed by people you don’t normally hear from.  For many people, that is Black women.  Oh, we think we know already.  But are you hearing their pain?  Can you describe accurately and without tears what it is like to raise children as a Black mother today?  You may feel you are similar to the Black families you know. Except their experience of being an American is vastly different.  Be open to hearing their pain of living in a different country even though we walk the same streets.  All that is being asked is that you be present with their pain, of what it is like to be them. Create a container that holds their truth the best that you can for as long as you can.

Be present with your body.  Racism is experienced in the body, it is a lived and felt physical and emotional experience. The daily stresses of being Black mean that more stress hormones are released on a daily basis.  This is exhausting.  It also wears down hearts, pancreases, and placentas when they form.  That’s why poorer health exists.  Not because of anything a Black person did, but because of the many things that White people do or could do that cause harm.  During this week of peaceful protests; riots; and violence against people, property and the police system, our whole perception of ourselves as Americans is changing. People are individually and collectively recalibrating who they are and how to act.  Social change that is rooted in vulnerability and listening to those in deep pain express their truth to those of us in power, requires us to cultivate a more radical kind of compassion.

When you are really present to racism and the pain it causes, you will feel it in your body.  You may feel nauseous, anxious, exhausted, weepy, or have body aches and pains.  Caregivers have highly developed empathic systems.  The mirror neurons in their brain are often firing, allowing the caregiver to feel exactly what the person they are present with is feeling.  This makes us effective doulas, nurses, midwives, social workers, and other kinds of caregivers.  But it means you will also feel the realities of racism viscerally. This is not necessarily a bad thing if you want social change. It’s not a bad thing at all if you want to get it on a gut level about what racism is and how it effects people. It’s a fraction of what oppressed peoples feel on a daily basis.

Be present with your own feelings. ALL of them.  There are feelings that show empathy and understanding; those that are angry and frustrated.  But I want you to pay attention to the ones that “wish it was over”; that are angry “that we have to deal with this now”; and are afraid for the “new racial normal” that we will co-create in this country.  If you don’t recognize and purge the frustration and resistance to changing our social bargain between White and Black people, you will be part of the problem and not the solution.  It really does start with you.

Extend your compassion. Racism of all kinds is based on a million acts of apathy and uncaring; of not recognizing the fundamental personhood of a human being. When we increase our ability to be present with the pain being collectively released in front of us, the more effective we will be when we are called to action. Compassion is the beginning of all social change, of the recognition of our collective humanity. It is an individual act, a choice we each must make over and over again. But when we all make it, the existing way of doing things becomes intolerable. In this way, beginning with our inner selves contributes to lasting change.