How the U.S. Women’s Movements Influence The Lack of Doula Research, Part IV of IV 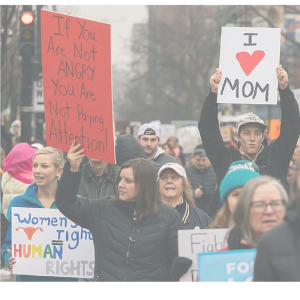 The last major influence on why there isn’t pressure for more birth doula support research is that it doesn’t fit neatly into a feminist or women centered agenda in the United States.   During the Second Wave of Feminism in the 1970’s, women’s health issues moved to the forefront. Exploration of women’s bodies, books on reproductive health, and access to abortion became public topics. At the same time there was considerable tension within the movement itself about how to honor motherhood and childbirth while simultaneously working for economic freedom from the home. What most feminists did was decide to tackle abortion access first and once that was accomplished, move on to childbirth rights. No one anticipated decades of divisive and continuing arguments about abortion. Almost everyone knew a woman who had died or lost her fertility due to an illegal abortion, so it seemed like common sense to many people. There was little religious opposition like we associate with the issue today.

During the 1970’s and early 1980’s, when birth activists tried to make rights in childbirth a national agenda item, no one was really sure how to go about it. Anything to do with motherhood or reproduction seemed to feed the opposition’s arguments against women’s economic independence from the home. Because of the pushback on abortion rights and ambiguity in how to pursue birth issues, women’s rights and experiences in having babies disappeared from the feminist agenda of U.S. mainstream organizations.

The doula movement in the U.S. today also reflects this larger chasm. As Mahoney and Mitchell point out in their book, The Doulas; Radical Care for Pregnant People, we tend to see abortion and motherhood as two extreme acts happening to different people. Instead the fundamental truth is that they are different choices made at different times during the same person’s reproductive lifespan.

In the 1980’s when the Cesarean Prevention Movement (now International Cesarean Awareness Network) was founded, birth activists expected that the cause would be taken up by cesarean and VBAC mothers as well as other women who cared about perinatal issues. The books of that time reflect this thinking: Silent Knife (Wainer Cohen), Open Season (Wainer Cohen), and VBAC: Very Beautiful and Courageous (Baptisti Richards). I think leaders honestly forgot that these women were raising children and likely wanted to avoid the reminders of their unpleasant birth experiences. There was also the idea that we didn’t know who to appeal to – there was no government agency or right to be proclaimed. What we have been asking is for the whole profession of obstetrics to change how they view female bodies and the people who live in those bodies. Instead of political forces, women tried to use the market force of economics and choose careproviders that honored them. But because of the insurance system in the U.S., patients did not get to choose between medical careproviders with different styles of practice. How people are treated in childbirth today is a direct consequence of the inability to push a human rights focus into obstetric care and shift how the female body is viewed. In general, our current system does not value the individual person’s experience and bodily integrity unless a doula is present to remind people. That is why doula research is so integral to any kind of change in obstetric care.

Not until the last five years have any national women’s organizations taken the U.S government to task about women’s rights in childbirth. We had cesarean birth rates of over 30% for ten years before anyone outside of the birth community even whimpered about it on a national scale. From a consumer perspective, birth doulas are part of the answer. It is one of the few measures a pregnant person can take on their own behalf.

National women’s organizations have not (yet) pushed to make funding of doula studies an important national health agenda item. We need their support and demanding voices for health equity and reproductive justice to make sure that how people are cared for in labor enhances their life and parenting, rather than creating more injuries to heal from.

If activism and organizing can make a difference, things are certainly more hopeful than they were even six years ago. Along with Human Rights in Childbirth and Improving Birth (formerly Coalition to Improve Maternity Services), we have the March for Moms and their partners, Every Mother Counts, and an expose on Motherhood in America by The Guardian news service.

These organizations are focusing on best practices for birthing people and they include doula support on ALL of their agendas. However, health care policy relies on current data. It’s not good practice to rely on randomized trials from twenty years ago. We need better research on doula support now, based on the way doulas practice today, to show that we still get fabulous outcomes. Those same studies also need to reveal how much agency the birth doula actually has in influencing obstetrical practices. If all laboring participants have to have continuous electronic fetal monitoring, are confined to bed, are not allowed to eat, have IV’s, and time limits are placed on the length of labor, the outcomes are not going to be as good as if the laboring person has freedom of choice in those areas.

Together we have to demand high quality and recent doula research and make caring for pregnant and laboring people in the best way possible a national agenda item. We must not compromise with items that look pretty (birthing rooms and fashionable labor gowns) but that don’t fundamentally change how our bodies or psyches are treated. As members of these and other general interest organizations, we have to put the need for this research on their agendas, and let them know why it is so important to have.

We need to work together to create a research agenda for birth doula support in the United States and elsewhere. Birth doula studies need multidisciplinary teams of physicians, nurses, researchers and birth doulas to gain review board approvals, hospital staff approvals, funding, and be published in peer reviewed and database listed journals. Most of all we need to push through the political barriers that keep our hospital systems from serving the most vulnerable with the best care: our mothers and children. Only together can we put enough pressure on systems to change and gain the research we need to keep up that pressure.

I’ve been doing what I can from outside that system – collecting data on doula practices, developing theories on why doula support influences physiologic birth so positively, and publishing in journals and peer reviewed books that accept my work. I now have a university fellowship to move forward in my research and publishing. But I, Amy Gilliland cannot do it alone – and neither can Rebecca Dekker or Katy Kozhimannil or Christine Morton. So if you are reading this and you have influence – as a nursing graduate student or the partner of an obstetrician-gynecologist at a research hospital – or maybe you are that doctor, STEP UP! If you are a journal editor, consider announcing a special issue on doula support for 2021. Let researchers know their quality work can be published. If you are a university professor, consider a doula research project that would include two or three graduate students so everyone can publish. If you are a person, consider joining or volunteering with one of the organizations mentioned here. The future of our medical system needs you, and it needs all of us to put the pressure on and get the research we need that will continue to create change.

Photo from 1/21/17, Madison, Wisconsin March for Women, used with permission