Open Your Doors, Childbirth Educators! Why Not Teach Anyone Who Wants To Know About Birth? 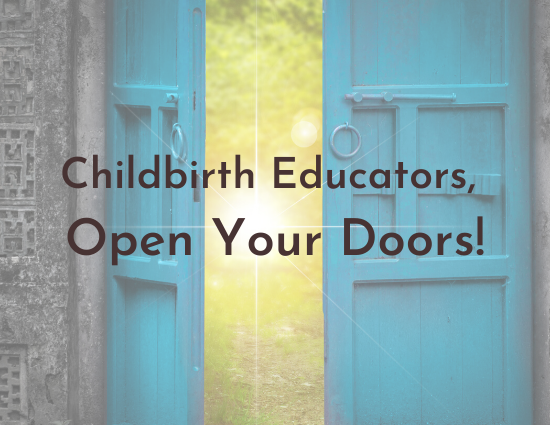 As a researcher, I’ve paid attention to two curious trends.  One, people are taking less childbirth education courses while pregnant.  Two, more people are taking doula trainings across North America, but most of them aren’t there to become doulas (Gilliland, 2016).  We also know that when birthing people are uneducated typical interventions are used more often, which increases the risks of negative consequences for nurses, physicians, doulas, and the patient.  How can we make sense of these trends and use them to our benefit?

In the “Motivations to Attend A Doula Training” study, seventy-one percent of doula training participants were there to increase their knowledge about birth.  To me, it sounds like what they really need is a childbirth education course.  But you know what?  In our culture, you aren’t allowed to take one unless you have the privilege of being pregnant or are invited by a pregnant person to attend. I mean, once you think about it, what’s up with that? Why are you restricting birth education to such a tiny and specific segment of the population? Why aren’t you, childbirth educator, teaching anyone who wants to know about pregnancy and childbirth and postpartum?

Childbirth education has the potential to be transformative for the individual. How often have we heard a pregnant person or partner say, “I wish I’d known that before, I would have made a different decision.”  It also has the potential to be transformative for the community.  If we educated anyone who wanted to learn about birth, then people would be having different conversations. People would connect in their childbirth education course who would not normally intersect. They talk to their friends and colleagues about what they are learning, and if we teach them how, they learn to listen differently when people share their birth story.  They learn to listen with compassion, rather than to be correct.  By spreading information and compassionate listening (as best we can), childbirth education has the potential to transform a community.

I know you are wondering, “If pregnant people don’t want to take a birth class, why would I think anyone else would?”

First, you are assuming that because pregnant families have the most to gain, that would lead to high motivation to acquire the knowledge.  That assumes that families find knowledge valuable AND that they know a course where people socialize is the most valuable way to get it. There also has to be a motivational trigger that gets them to actually sign up and leave the house. [https://www.behaviormodel.org/]  In the short term, it’s indisputable that pregnant families have the most to gain. However in the long term, other people have a lot to gain as well. Instead of trying to locate the constantly changing market of pregnant families, why don’t you expand your market of who could take your classes?  To like, maybe, EVERYBODY.  Anyone who wants to can take a class and learn about pregnancy and childbirth from you.

When you educate a non-pregnant person, they continue to engage with the material over and over again in different ways.  On a personal level, they may learn helpful breathing skills for stressful situations. They may also learn how hormones affect our behavior. But they also talk to the pregnant people they meet differently, perhaps indirectly influencing them to take a birthing class. Once they become aware of the general indignities of the birth process in our hospital system, these people can be champions for change. Changing the conversation is where all change starts. We have to change our point of view through social interaction before we change our actions or support those changes in others.

How did I get to this perspective? In my ten years as Madison College faculty, I regularly spent one or two class periods in my psychology courses on pregnancy and childbirth. Over half of the class time was driven by their questions, and people of varying ages were fascinated by what they learned. It was one of the most popular topics of the semester. In addition, in 2010 and 2014, I completed the first and second waves of the “Motivations to Attend Birth Doula Trainings” Study. There were almost 500 participants registered for a DONA International birth doula training workshop who were surveyed BEFORE their training about why they were there. I’ve written about those results extensively here, here and here. Since I am a career educator as well as a scientific researcher, the results of the study changed how and what I taught. I began a course that was open to everyone, but to distinguish it from a class for parents, I called it an “Introduction to Childbirth for Professionals” course. It’s one eight or ten-hour day, and I’ve never had to cancel a course. I learned that when you truly open your doors, birth education attracts everyone:

●      Male and female youth who do NOT know a pregnant person

●      Sixty-year-old women who had never had children

●      Every age, gender, race, and parental status in between

●      People trying to figure out what happened at their birth

●      People who love to learn, especially about health and wellness

In my community, it worked best to start with a graduated approach.  In my initial marketing, instead of “birth classes for everyone”, I focused on people where a working knowledge of childbirth would be helpful in their career. This helped to introduce a new idea. But once people knew they could take a birth class from me for their own enjoyment, my courses have always filled. It’s been challenging to make the paradigm shift away from educating only pregnant families, but I’ve found it is even more enriching and fulfilling. I know this knowledge will be passed on and discussed because these learners are here because they want to be. I’m reaching the people who create the container around the pregnant person, and that can be just as vital a group to reach as the pregnant family themselves.