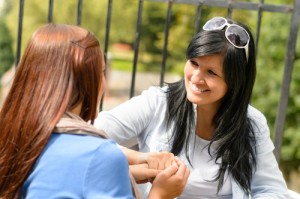 Talk to the teens in your life today.  From what I can see, the decision about where to give birth and how to cope with labor is made long before conception.  Unlike previous generations, teens today are exposed to media misrepresentations of labor and birth on multiple television shows (Elson, 2009).  Based on a recent literature search (Toohill, 2014), it seems that more young women and men today are afraid of birth than at any previous time.  While the issue is multifaceted (Laursen, 2008; Saisto, 2001) the simultaneous rise in birth “reality” shows and studies of birth fear doesn’t feel coincidental.

Developmentally, girls aged 12-14 begin to ponder their adult future and consider what it means to get pregnant and give birth.  So naturally they turn to TV and to Youtube.  While many home videos are intended to show the raw power and coping potential of women, to an unknowing teen they can be downright scary.  Even videos posted to humor (Two Men Watch  Childbirth For The First Time] – can validate the fears that young people of all genders may have.

As birth professionals, we know the truth.  Given the right circumstances, labor can be coped with.  For the most part, labor is boring, with not much happening for hours at a time.  So TV producers create drama with music, narration, and selective editing.  Women’s bodies know how to create and grow a human being and get them out.  The more we interfere with that process, and that includes TV cameras and lights, the harder it can be on the mom.  Like any major undertaking, including moving house or completing a science project, labor and birth requires planning and support to do in a satisfying way.

Teens need our messages about the real nature of birth and manufactured depictions they see on TV and some uploaded videos.  They need to be engaged with, not talked at.  Even twelve year olds have critical thinking skills and despise being treated as if they are only passive consumers.

So how do you have a conversation with a teen about birth?  Make sure you are having a discussion, not a lecture.  Listen to their answers, and build upon what they share with you.  If possible, let them lead the discussion.  If teens are shy or used to being talked at, your conversation starters may be met with silence.  Use your doula skills to observe their “nonverbal leakage”; people don’t always need words to communicate!

You can start a conversation by responding to a family walking by with a baby, seeing a pregnant woman in a magazine, or even without any reason to at all.  Let your passion give you courage, and proceed from there.  “Hey, you know I’m a doula, right?  Do you know what I do?  Do you know why I do it?”

Another approach is to build on teachable moments.  “Remember that birth scene in ——-?  Did that seem realistic to you?” Build on what was valid in their comment or the scene, but don’t bash if their answer is “yes”.  Say, “I’m concerned when people see that, they’ll think that’s what labor is really like.  Because it scares people/makes birth seem dangerous/makes it seem like its painful for hours without ending.  That’s not the way that I experience it.”  Be REAL – so many people tell teens what they ought to think or do, rather than realizing they are thinking human beings making important life altering decisions almost every day.

Make sure to emphasize that both men and women need support in birth.  This is absolutely critical.  We place a disproportionate burden on men to do labor support and deny their own feelings and the developmental processes of fatherhood.  This is in the process of changing, but only if we continue to hammer home the message that men matter too.

Offer to speak to Girl Scouts (Cadettes, Seniors, and Ambassadors may have health badges), Boys and Girls Clubs, and church teen meetings.  Using the first fifteen minutes of Vicki Elson’s video, Laboring Under An Illusion, can be a great conversation starter.  It’s engaging, to the point, and it will make them laugh.  People remember more when they laugh and that helps to break the ice with groups of adolescents.

Keep your message basic, simple, and repetitive.  Labor and birth aren’t scary.  Ninety-five percent of births are normal and nothing bad happens.  Some people see birth as so safe and normal, they give birth at home and in birth centers.  Pregnancy and birth are wellness conditions, not illnesses.  Given enough support, women’s bodies function well and coping with labor is possible without resorting to medications and interventions.

Young adults will often do what feels right to them and that depends on what perspectives they’ve been exposed to previously.  If we want more informed consumers, we need to start at the most impressionable time: in adolescence when they first see themselves as potential mothers and fathers.