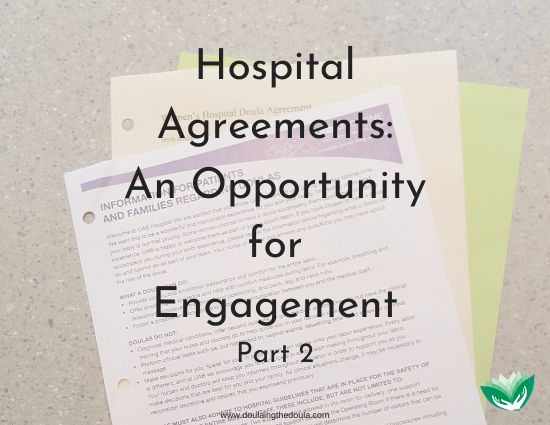 If a doula agreement is being waved in front of you, congratulations! It means that your doula community has gotten too large to ignore and is having enough of an impact that the hospital wants to exert some control. Now the real work begins, not with clients, but with the institutions where our clients are choosing to birth. You have an opportunity to create a collaborative atmosphere even if their actions seem hostile at the moment. This is politics, system change, and social change happening in your neighborhood, and I hope to give you concrete suggestions to co-create a synergistic relationship – even if it seems impossible now.

Keep the focus on your long term goal: an open channel of communication between this hospital and the doula community. Your goal is not to get the hospital to eradicate the agreement but to build understanding and strong reliable communication channels between two groups of people. You are using the proffered agreement as an opportunity for greater connection, understanding and dialogue between the people most affected by it. It’s imperative that the doulas who are approaching this conflict negotiation realize that attacking the hospital’s solution, the agreement, is counterproductive.[1] Anytime you openly criticize something, you make that person defensive about it and more entrenched that they are right. Instead, you have to put the emphasis on the conflict and your mutual interest in resolving it. If you focus on the agreement and what’s ‘wrong’ with it, you will get into a power struggle and doulas will likely lose. If not this issue, how you handle this will set a precedent for communicating about any future conflicts. Sorry to increase the tension, but this is an influential time and needs to be recognized as such.

So what can doulas do?

Susan Martensen, a doula and trainer in Ottawa, Ontario, Canada, states that her local doula group has worked hard to be recognized as part of “The Care Team” and not as a “visitor”. The instigating situation that brought doulas and nurses together was the SARS outbreak in 2003. Hospitals sought to limit access for anyone into the hospital. Doulas in the area formed a new group to develop a standard of practice and code of ethics based on ones from their different training organizations. All doulas in the area agreed to sign the document they had created. “Two hospitals in the area agreed to regular meetings to build bridges and establish doulas as part of the Care team (and not included in the usual visitor policy),” according to Ms. Martensen. “It took several in-services to introduce, or re-introduce, the role of the doula to the nursing staff, so that we all understood the collaborative model of care. The meeting was multi-disciplinary, so there were doctors, anesthetists, pediatricians, etc, there, but not everyone and not all at the same time.”

The next step was to establish nametags for the doulas that were created by the doula group and a book at the nurse’s station that listed photos, names and contact information for the doulas. “Over time we developed a complaint process as well as establishing a system for addressing any conflicts during a labor,” adds Ms. Martensen. “It is a collaborative model that has worked well for the most part, and it is not administered by the hospitals.” They continue to have regular meetings with key personnel and doulas to provide feedback and assess their collaboration with one another. Ms. Martensen feels that the emphasis on collaboration and being seen as a valued member of the care team is what has made all the difference.

Ana Paula Markel, of BiniBirth in Los Angeles, California, USA, initially worked with a small task force at Cedars Sinai Medical Center. A rising number of conflicts was leading to a tense atmosphere, and Ms. Markel was talking to a labor and delivery nurse about it. Out of that casual conversation, a small group of interested individuals got together and outlined several steps which they have been implementing in the last year. They created a Cedars-Doula Advisory Committee made up of labor and delivery nurses, midwives, the nurse manager, and six doulas from the community who each have a different level of experience. Ms. Markel feels that having new doulas involved is crucial, since they often present a different perspective. The CDAC meets monthly, and has its own email address where people can write with questions or complaints. It is used by both doulas and nurses. Based on this feedback, they created a teach-in day for doulas, which was also attended by much of the labor and delivery staff. They did several role plays of challenging scenarios and explored the point of view of both nurses and doulas and what each thought the other “should” be doing. It was very enlightening for everyone. After attending the teach-in day, doulas received a recognition badge to wear. In this way nurses were reassured about the doula’s perspective and background knowledge.

Both the Toronto and Los Angeles doula communities were able to turn potential conflicts into opportunities for collaboration and enrichment. So, take heart! It can be done – you can create a process that benefits many stakeholders long term.  It is up to us, as doulas, to do the work and it is a task to be embraced. To have the ear of hospital leaders, even if it is coming in the guise of an untenable agreement, is what decades of doulas have been waiting for: an opportunity to create positive change in the system.

Here is a pdf copy of this blog post: Gilliland Hospital Agreements Engagement

Other conflict resolution, negotiation, or mediation resources may be available through a community college, university extension, adult education, or state or provincial small business support organization.