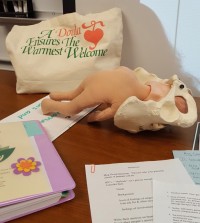 Recently, Kim James of DoulaMatch.net reported that birth and postpartum doulas have listed 67 different training organizations in their online profiles. Why are there so many? What are the implications for our profession?

If you think about it, there are few ways for someone to utilize the knowledge they’ve gained as a doula except to train other people. While some organizations have individual recognition for a member’s achievements, that’s about it. There are no national awards and no career ladders to climb. Expansion into more lucrative positions is expected in other paraprofessions; but if you want to continue as a doula the only obvious paths are to train others or start an agency. So that’s one reason – individuals want to move forward in their career options.

Unfortunately, some people are more invested in making money than in furthering the doula profession or ensuring that the doulas they do train are qualified. Anytime price or speed of “certification” is advertised over the educational experience, I know those people have missed the point. These days it’s easy to offer an online course. The problem with online courses is that doulaing is a relationship that is based in touch, eye contact and the stimulation of oxytocin, and you can’t effectively teach most people how to relate to others in those ways unless you are also face to face. Some online courses include a Skype or FaceTime mentor, which is better than nothing. But I have had several people who took an online course subsequently enroll in my in person workshop. They were familiar with the concepts but didn’t have the deep knowledge or confidence to actually apply them with a client.

Sixty seven different training organizations means we have little unity and uniformity in training standards. Preparation could be sloppy or exhaustive. Doulas could learn its okay to judge people’s choices and that some ways to give birth are better than others, and our role is to herd people into those “better” ways. There is no standard ethical platform. No practice standards that we all agree on. There is no unifying principle that we can assume about one another.

The certification that is offered by most of these groups has no vetting. To me, “certifying” that someone is a qualified doula simply because they wrote an essay, read some books, made it to a few births and summarized them is not enough. Is anyone making sure they are good ethical people? Has the organization contacted and spoken with several of the doula’s references? Will the organization stand by its certifying of the doula if a complaint is made? I consider an organization to be a strong one when they will stand behind their doulas, stating they have been trained in the most rigorous way possible.

If consumers or careproviders have a complaint about your behavior, they can bring it to the organization’s grievance committee and be heard. They have recourse. From my checking, very few groups certify doulas at this level. What they call certification is merely the completion of a checklist of requirements. There are few qualifications for character or job performance, and no recourse for future complaints.

Because training quality is so variable, it contributes to an “anything goes” atmosphere. We look unprofessional and unorganized to outsiders. This fuels the reluctance many medical professionals have in generally recommending doulas. They may recommend an individual doula, but not doulas in general. There is no guarantee of quality and no consumer protection. If parents are unhappy with their doula’s performance, they may not have any recourse. This could bounce back to the medical person who recommended them.

Now I’ve been doing professional labor support since before the word “doula” was in use. I was a part of the conversation when the first four large scale training organizations (ALACE, DONA, CBI, CAPPA) went from an idea in someone’s head to creating certification standards. It used to be that calling yourself a “doula” meant that you could assume certain things about that person. With the differing standards and philosophies from sixty-seven organizations, that is no longer true. Because we have a diluted group identity, I see many people seeking strength in an organizational identity.

Globally, we are in a time when nationalism has become more prominent. Rather than thinking about what is best for us on a planetary or humanitarian scale, people are concerned about the well being of their own nation. They see themselves as belonging and being similar to that group, rather than to people as a whole. I see the same thing happening with doula identities. Are you a “Xxxxx doula”? Are you “Xxxxx proud”? The organizational identity substitutes for the larger sense of connection we had with one another no matter what our training and certification affiliation. Being independent and staunchly unaffiliated with any group is also an identity. While this might work for an individual or the organization, it doesn’t serve the movement as a whole.

At the same time, I don’t think this scattering of training organizations is something to get too excited about. For one thing, when I examine the histories of both social movements and the growth of professions, it seems that this diversification is a natural stage of development. It is a part of the spreading of the movement’s belief system and the increased demand for workers to do this job. It is unhappiness with this stage and the lack of uniformity in standards that usually leads to large scale organizations to create universal standards. The desire for this comes from within and without. For example, doulas who see the need to affiliate around common values and behavioral standards. But that isn’t enough. There is usually public pressure to provide standards that protect consumers and offer remedies when [in this case, a doula’s] promises are not fulfilled.

So, if I take a step back and look at things over time, I can see 67 training organizations as a positive sign of growth in the demand for doulas. It is a stage in our profession’s development. For the most part, growth has been driven by people who want to offer the service, not by people demanding the service. It’s been up to doulas to educate the public about why they would want a postpartum or birth doula. As far as I can find, no one has tried to educate the public about why they would want a doula whose certifying organization has personally screened them and who offers a grievance procedure in case there are problems. Nor has anyone, besides me, tried to guide wannabe doulas into asking questions about a trainer or training BEFORE they’ve spent their money. Several high quality trainers have mentioned that they are asked for discounts for their workshop because someone already spent their budget on a lousy one.