A World Where We Didn’t Need Doulas 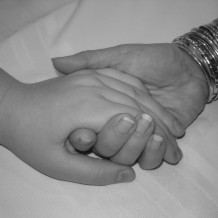 Maybe it comes from being weaned on Star Trek reruns but I’ve often contemplated alternate universes.  The kind where if a different decision had been made the whole future course of humanity would be altered.  Recently I’ve contemplated what if we had a birth culture today where professional doulas weren’t necessary?  Going back in time, the critical point seems to be a little over one hundred years ago with women deciding to give birth in hospitals.

Like most cultural changes the reasons were multifaceted.  Pain relief was possible in a hospital setting.  At that time relief from labor pain was considered a feminist issue.  Rich women also wanted to set themselves apart from women in the lower classes so paying to go to a hospital accomplished that.  There is also the drive for modernism, to do what is new and improved which was hospital birth.  Once the wealthy had established a new norm and the physician profession benefited financially, a social movement for “safe and healthy” births in the hospital was quickly established.  Within a generation, our birth norms had altered the trajectory of our society. **

But what if something else happened instead?  What if wealthy women demanded that physicians come to their homes?  What if they asked to be attended by a midwife as well as a physician?  What if women surrounded each other with their closest friends and family members instead of strangers?  What if women retained their power by being in their own homes instead of transferring it to someone else in an unfamiliar location?  If physicians could bring their pain relieving medicines into the home or trained midwives to use them, we would have enough caregivers to provide for many laboring mothers.  Women and men would grow up with labor and birth, understanding its meaning and its risks.

As in all things there are probably some women and men who would be more drawn to helping during birth.  But they would have the opportunity to be part of a helping team from a young age and many more people would see birth as normal.  They would understand the caring skills that are necessary to see others through difficult times.  Instead of the unique skills set that doulas have now, these skills would be learned at an early age.  We would all learn to doula one another.

The paradigm of needing assistance during difficult transitions would be widespread.  Simply by growing up in a family or village group, we would learn how to care for one another.  Labor and birth would be our teachers.  Midwives, rather than being derided by physicians and seen as competitors for birth business, would be a necessary part of the paradigm.  Hospital birth would be the exception, not the norm.  With plenty of assistance from loved ones and reassurance from being in their own homes, fewer women might have needed pain relief to cope.  We would have an uninterrupted cycle of support, caring, and knowledge that spanned generations.  There would be no need for doulas because we would all be doulas.  In addition to whatever else we did in the world, doulaing would be second nature.

All the other events in the world – multiple wars, the Depression, the Atomic Age, all would have unfolded differently because we were together and cared about one another.  Touching someone’s brow when they are in pain and connecting with them on a heart level changes a person.  We see the inner power of connection and caring.  I do not think those lessons would be confined to the birth room but would be spread across the world.  Our whole social history would be different if we all learned the value and skills of caring.

So I guess I’m saying that doulaing has the power to change the world.  It shouldn’t have been confined to a select few but something all people should have experienced themselves and learned to do.  However we live in a world that has compartmentalized caring and who does and does not do it.  It has demanded that we professionalize caring in order to exist as a group in the current medical systems.  Sigh.  I think I’ll go watch another Star Trek rerun.

*This paragraph is a painfully brief summary.  Two good books written by historians are “Reclaiming Birth: History and Heroines of American Childbirth Reform” by Margot Edwards and Mary Waldorf (1984) and “Brought To Bed: A History of Childbearing in America” (1999) by Judith Walzer Leavitt.  There is also “Birth: The Surprising History of How We Are Born” by Tina Cassidy, a reporter.

** We know today that births in the hospital were not safer nor healthier for mother and baby.  However that was not the public perception of the time.  The propaganda circulating derided midwifery and home birth as “dirty”.   The American Medical Association was originally founded to push midwives from the market of delivering babies.